The school was founded when three Christian Brothers came to Naas in 1871 and set up the school in the building now known as the Moat Hall. In 1958, the secondary school moved to our current site on Corban’s Lane. Extensions were completed in 1981, 1995 and 2005.

Finally, a fine four-floor extension was completed in 2010 and this was followed by a complete refurbishment of the existing buildings in 2011. We are presently working on an All Weather Sports Facility which will be a fabulous addition to the school.

Mr Ben Travers was appointed Principal in February 2014 succeeding Mr Noel Merrick who was the first lay principal in 1992.

Ms Anne Meade is the 6th Deputy Principal of the school succeeding Ben Travers, Liam McManus, Tom Maguire, Paddy Finnegan and Con O’Dwyer who was the first Vice-Principal in 1968.

As the school exceeded 1000 students in 2016, Mr Leo Murphy was appointed as the second Deputy Principal.

In 2017 Ms Sharon Power was appointed as the third Deputy Principal.

Mr Rory Purcell was appointed Deputy Principal on the retirement of Anne Meade in 2019. 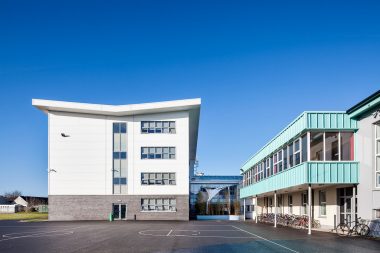 The school is managed by a Board of Management comprising nominees of the trustees, parents and staff. Enrolment is currently over 1014 students. The school traditionally welcomes students from a wide catchment area and this mix of town and country contributes greatly to the excellent atmosphere which is a celebrated feature of the school.

The mission of the school is to provide Catholic education in the Edmund Rice tradition. We strive to create a school atmosphere where faith and Christian values of respect, justice and integrity are nurtured.

The school aims to provide the very best education for all our students. We strive to provide students with excellent teaching and learning and we expect each student to work hard and to achieve his full potential irrespective of ability.

Valuing each and every student irrespective of ability, special need, background or family circumstance remains a core value in our school. We also value the tremendous support of parents for the school.

All in the school are committed to the creation of an atmosphere where excellent relationships and positive behaviour are encouraged and where the school uniform is worn with pride both inside and outside the school.